What is Diversity and Inclusion

Diversity means difference and inclusion means our ability to include difference. To a business or organisation this means ensuring not only that your staff come from a range of ethnicities, genders,  social background and sexual orientations, but also creating an environment in which all staff feel comfortable and are able to freely express themselves. Diversity and inclusion can be a fantastic tool in the journey to creating a highly effective and welcoming office space.

What is Social Mobility

Social mobility in the workplace is about how a company ensures that they are open to, and progress the talent of, people from different backgrounds. Social mobility is reduced when an employer takes actions such as only hiring from a select list of universities, or employs people based on family links rather than merit.

Videos on Diversity and Inclusion

Since 2017 the list of the top 50 employers for social mobility has been published in a joint effort between the Social Mobility Commission, the Social Mobility Foundation and the City of London Corporation. Below are the top 50 employers for 2018 (the 2017 rankings can be found here). The rankings are far from static, as organisations make considerable efforts towards enhancing their social mobility this is reflected accordingly in their rankings. 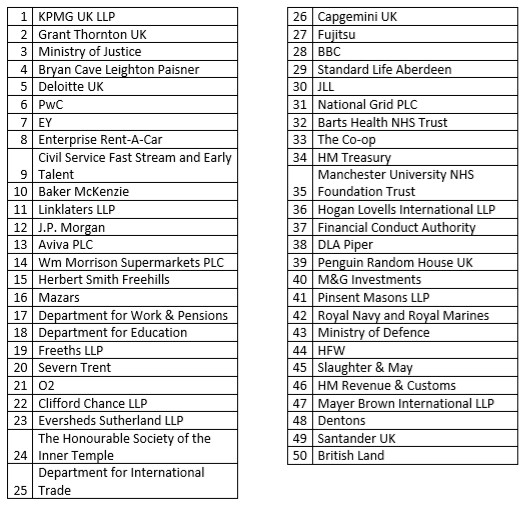 Business Case for Diversity and Inclusion

The business case for diversity and inclusion is by no means a new idea, it was first explored in the USA in the late 1980s. By 1990 various studies had been carried out that were linking diverse staff groups with positive commercial outcomes. Despite the extensive evidence that D&I has a strong positive impact on business many companies and organisation are still struggling to make their staff group reflective of the communities they operate in. As time progresses D&I will become more important in our globalised world. Massive global economic centres such as London will be so interconnected with numerous cultures and lifestyles that D&I will be crucial for commercial survival. The best way to visualise the benefits of D&I, and the problems with a lack of it, is to view it as an individual task. If your intention is to build a house, you wouldn’t bring a toolbox full of nothing but hammers. The more different tools you have, the better the finished house will be.

Below we have included a timeline of how the business case has developed.

1990: Harvard Business Review published “From Affirmative Action to Affirming Diversity” in which it stated, “In business terms, a diverse work force is not something your company ought to have; it’s something your company does have, or soon will have. Learning to manage that diversity will make you more competitive.”

2010: Kellogg School of Management published “Better Decisions through Diversity” in which it linked heterogeneity to innovative ideas and better team performance.

2013: Deloitte published “Waiter, is that inclusion in my soup?” in which they tied diversity and inclusion to better business performance (83%), responsiveness to customer needs (31%), and team collaboration (42%).

2013: Center for Talent Innovation published “Innovation, Diversity, and Market Growth” in which it found that publicly traded companies with 2D diversity (exhibiting both inherent and acquired diversity) were 70% more likely to capture a new market, 75% more likely to see ideas actually become productized, and 158% (no, that’s not a typo) more likely to understand their target end-users and innovate effectively if one or more members on the team represent the user’s demographic.

2014: Stephen Frost, in his book, “The Inclusion Imperative” notes that “discriminating against women, homosexuals, and disabled people is costing $64 billion dollars a year in the U.S. alone.”

2015: McKinsey & Company publishes “Why Diversity Matters,” in which it notes that “Companies in the top quartile for racial and ethnic diversity are 35 percent more likely to have financial returns above their respective national industry medians,”

2017: Deloitte’s Global Human Capital Trends report shows the rising priority level of D&I among executives compared to previous years. Over two-thirds of executives rate D&I as an important issue while 38% of executives report their CEOs (not HR) being the primary sponsor of D&I initiatives. The report also highlights the alarming reality gap which shows most companies’ D&I maturity levels being “very low.”

2017: Boston Consulting Group (BCG) revealed its research that shows companies’ “Total Societal Impact” has proven to be a statistically significant in creating a reliable growth path, a reduced risk of negative, even cataclysmic, events, and, most likely, increased longevity.

2017/2018: McKinsey & Company released another set of research findings that once again confirmed the statistical significance of having gender- and race-based diversity leading to better financial performance. It reminded the reader that “Creating an effective inclusion and diversity strategy is no small effort and requires strong, sustained, and inclusive leadership. But we, and many of the companies we studied, believe the potential benefits of stronger business performance are well worth it.”

The articles listed below evidence the business case for having a diverse and inclusive workplace.